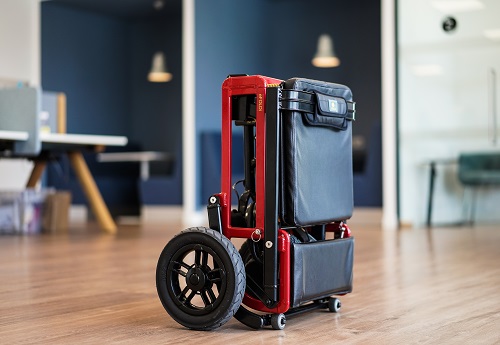 London, UK – SunTech launches the World’s lightest folding mobility scooter and has raised over $30,000 in a few hours after launching on Kickstarter

On 18th July 2019, SunTech launched a crowdfunding campaign to fund the development of their latest eFOLDi Lite scooter that can be transported in a car or carried on a plane.

Winner of the British Invention of the Year, eFOLDi Lite is a mobility scooter that is much smaller, lighter and easier to use than previous eFOLDi versions. Users can unfold the scooter in seconds by opening one latch, releasing a pin and rolling it out.

“You won’t find anything else like eFOLDi Lite on the market right now. eFOLDi Lite is super lightweight at only 15kg and is the perfect travel and mobility companion” said eFOLDi creator Sumi Wang. “For those individuals with restricted mobility, eFOLDi Lite has a huge advantage as it looks nothing like a disability tool.”

eFOLDi Lite is packed full of features. It will carry loads of 120kg, and travel up to 22km on a single charge, with a maximum speed of 6km/h. The battery and rear wheels can be quickly removed to reduce the weight even further down to 12kg. A high torque motor enables the scooter to climb a 1 in 5 gradient, and it is powerful enough to tackle some of the roughest terrain. Thanks to its built-in electromagnetic brake system, it will stop quickly and hold securely on any slope.

Supporters of the campaign can pre-order an eFOLDi Lite on Kickstarter for a Super Early Bird price of £1199 / Approx $1599 USD, which is 50% off the future retail price. The campaign ends on 18th July 2019 and for more information about eFOLDi Lite, visit http://kck.st/2WO0NFJ.

eFOLDi is the winner of British Invention of the Year 2016 at The Gadget Show Live and Virgin VOOM runner-up. eFOLDi began like most good ideas, with a solution to a problem and was designed in tandem by Sumi and her father – renowned Chinese engineer Jianmin Wang. In 2012, Jianmin Wang broke his leg and was unable to get around. This paved the way for the creation of eFOLDi as an alternative method of transport to get around and the prototype was born.

In late 2016 eFOLDi went into production, disrupting the mobility scooter industry and attracting attention from every corner of the media. Since then £104,654 was raised on Crowdfunder and in 2018, that sum had soared to nearly £900,000 from international investors.