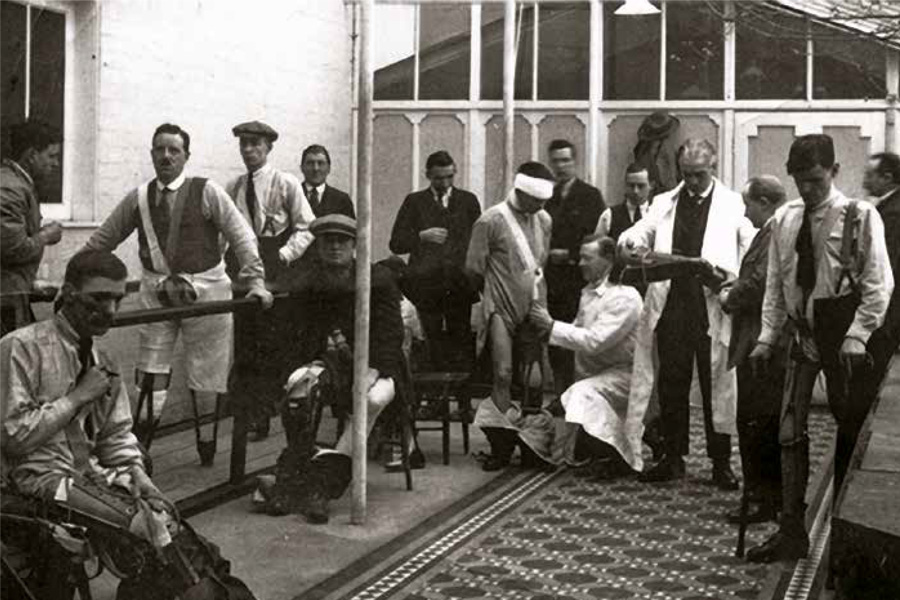 100+ years, three names, one mission: to improve standards and champion the industry

For over 100 years, the British Healthcare Trades Association (BHTA) has brought together hundreds of organisations across the healthcare and assistive technologies industry to facilitate business and raise standards. While our name may have changed over that time, our mission to support the health and care of the nation has stayed the same.

The founding of the association

The BHTA’s origins can be traced back to 1917, during the throes of the Great War. Severe material rationing created significant challenges for businesses working to support the nation with vital medical equipment. This shortage led a small group of business leaders to unite and discuss the possibility of working together to help the nation.

It was Edwin Arnold who called a small group of manufacturers together on Wednesday, June 13th 1917, leading to the formation of the Surgical Instrument Manufacturers Association (SIMA) – which would grow and evolve over time into the organisation it is today.

SIMA grew quickly and forged close ties with the government – with one of its first invitations being to a meeting at the War Office in 1917 – to support the effort, led by its first Chairman, Arthur W Down.

By the end of the Great War, the association had proven itself invaluable in supporting the needs of the country, ensuring the supply of vital medical equipment continued to reach those that needed it most.

As the decades passed, the association remained active, working with the government and other organisations to tackle challenges facing the healthcare industry.

Throughout the Second World War, SIMA and its members once again worked in partnership to aid the nation; just as it had done in the Great War. The association also played a role in supporting Aneurin Bevan’s newly-formed National Health Service (NHS) in the late 40s and early 50s, ensuring the emerging organisation had access to the vital equipment needed.

The growth and evolution of the association led to a change of name in 1958, as SIMA became the British Surgical Trades Association (BSTA).

It was not, however, until 1998 that the association would become known as the British Healthcare Trades Association (BHTA), to better reflect the breadth of the healthcare industry that it had come to represent.

Want to learn the full history of the BHTA, from its activity in two World Wars, to the formation of its Code of Practice to raise industry standards and protect consumers? Read our full history in our Centenary Anniversary Book

Now representing over 400 members across 12 sections of the healthcare and assistive technologies industry, the goal of the association remains the same today as it was when formed over a century ago: to bring the industry together to support and improve the health and care of the nation.

And, just as it has over its long and storied past, the BHTA and its members continue to come together to help the industry overcome the challenges it faces today, from COVID-19 to helping shape the future of the health and social care system for future generations.

You know our past,
now help shape the future

For over a century, the BHTA has worked to support and champion the needs of its members to raise industry standards and protect consumers and patients.

Join the BHTA and play a role in making historic differences to the issues that matter.